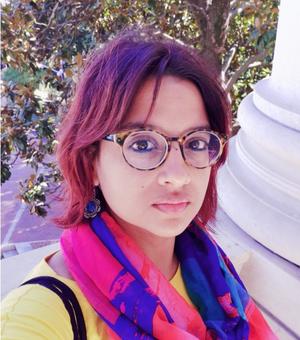 Research Associate
Faculty of History | Centre for the History of Science, Medicine, and Technology
manikarnika.dutta@history.ox.ac.uk

I am a historian of colonialism and medicine, with a specialist focus on the British Empire in South Asia. I hold an MA in Modern History (University of Calcutta), and an MSc in the History of Science, Medicine, and Technology funded by a Wellcome Trust Masters studentship (University of Oxford). My DPhil research, part of the Wellcome Trust-funded project 'From Sail to Steam: Health, Medicine, and the Victorian Navy', examined the co-emergence of British maritime and tropical hygiene, and the importance of sanitary reforms for empire-building. I have received the Royal Historical Society Early Career Fellowship grant (2021) to develop my doctoral thesis into a monograph. My research until now has produced three peer-reviewed publications, and has won the Taniguchi Medal (2018) and the William Bynum Essay Prize (2021).

My research examines the relationships among colonialism, medicine and public health and race in colonial India. I am currently preparing my first monograph, which explores the health and welfare of European seamen in British naval and merchant fleets in the Indian Ocean, both on board ships and in major Indian port cities. In doing so it expands the historical understanding of the key role of ‘mobile British subaltern subjects’ in shaping British imperialism and tropical and maritime hygiene in the nineteenth century.

While studying archival sources related to the Rockefeller Foundation’s (RF) philanthropic programmes, as Rockefeller Archive Center Fellow (2019), I gained new awareness of the transnational dimensions of public health research in colonial India. That research informs my current work as Research Associate in the 'Invisible Crises, Neglected Histories: Malaria in Asia, c. 1900-present' project, in which I am developing a collaborative output on the co-operation between the British colonial state and the RF in malaria research and eradication in twentith-century India.

In general, I am interested in studying the social, political and cultural determinants of disease and medicine, especially the role of transnational encounters in the development of public health in colonial India.

From the mid-nineteenth century, seamen were increasingly identified as vectors of epidemic diseases such as cholera. The rising acceptance of the germ theories of disease and contagion and the transition from sail to steam at this time increased the fear of the rapid spread of contagious diseases through these mobile people. This article examines how the British naval authorities, ship surgeons and the medical and municipal authorities in the Calcutta sailortown sought to improve maritime health and hygiene to prevent the spread of cholera among and by British seamen.

Intensity Of Lockdown In India And Other Countries

Intensity Of Lockdown In India And Other Countries

Can India flatten the curve: Result of lockdown should be visible in next two weeks

Can India flatten the curve: Result of lockdown should be visible in next two weeks

"Is the coronavirus pandemic 'unprecedented'? Historians tell us what we can learn from the past"

"Is the coronavirus pandemic 'unprecedented'? Historians tell us what we can learn from the past"

Contributor to the The Oxford COVID-19 Government Response Tracker (OxCGRT)

Contributor to the The Oxford COVID-19 Government Response Tracker (OxCGRT)

In collaboration with Wellcome Centre for Ethics and Humanities and The Uncomfortable Oxford, Oxford

Sailor’s Home or Public House? Confessions of a Christian Missionary in Colonial India

Sailor’s Home or Public House? Confessions of a Christian Missionary in Colonial India

Wellcome Centre for Ethics and Humanities (332561)

Wellcome Centre for Ethics and Humanities (332561)